I won my first photo contest

It’s not the first one that I entered though. I entered a contest to help raise money for Preserving Historic Sleeping Bear. I’m a big fan of Michigan. Sounds obvious since I live here but not every one in Michigan is a big fan, although I think it must be that they haven’t seen enough of it, but that’s just me. Like I saw on a shirt in the UP this summer, it said something like if you have to ask, you just don’t get it. Anyway, I digress… To enter one photo you paid $20 so over-achiever that I am, I paid $25 and submitted two. Well, $25 covered three entries so I uploaded one more for good measure. The photos were compiled and a local professional photographer judged the photos and selected to top 15 to be voted on. I was surprised to see that my photo was selected, and that it was the one that I wasn’t even going to submit. I asked once on Facebook for votes and saw within a couple days I had 16 votes. I was happy with that as I was up against some stiff competition. A week later the contest entered my head with many other random thoughts and I went back to see what was new with the voting. I was shocked to be in 3rd place. I put out the call to my friends and fans to check out the contest in case any one missed it. There was a lot of voting activity in those last days! A few days later, at the end of the contest I ended up with the most votes. One of the prizes was to have your photo printed and up for sale and receive part of the proceeds. How cool is that?? I love the other photos so I emailed the ‘powers that be’ and asked if I could pass along that prize to the 2nd and 3rd place winners. So now the top three photos will be printed and up for sale with all proceeds going to Preserve Historic Sleeping Bear. I better start working on next year’s photo competition. 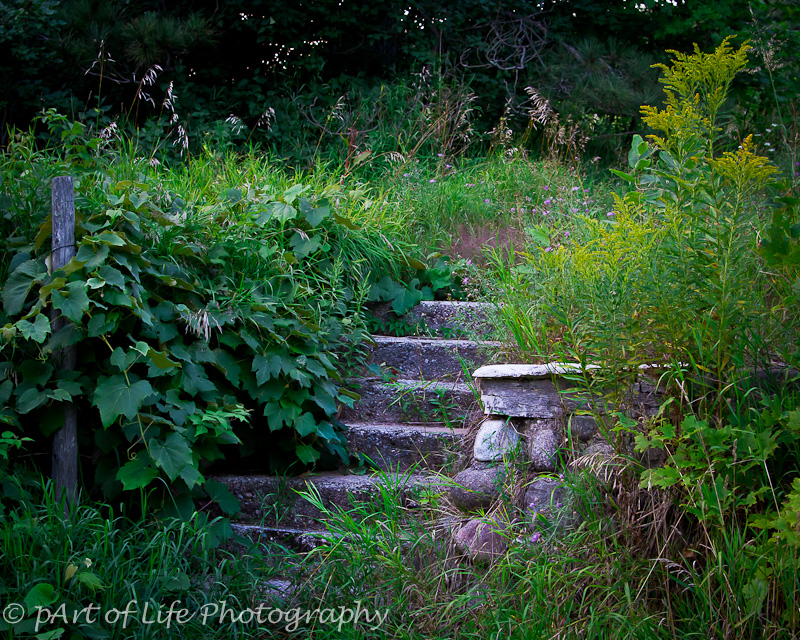 Stepping Back in Time

I talked to Susan at Preserving Historic Sleeping Bear and she said the farm looks different from when I photographed it. Volunteers cut back a lot of the growth that was interfering with the houses and returned it more to how it looked when the farm was inhabited. She said that two of my photos captured something that doesn’t exist now since the trimmed back a lot of the growth around the rock wall and the out building. I can’t wait to see my photo up at Port Oneida in poster size! I think I need a copy in my office since those little steps have really taken me somewhere, in life and in my mind.